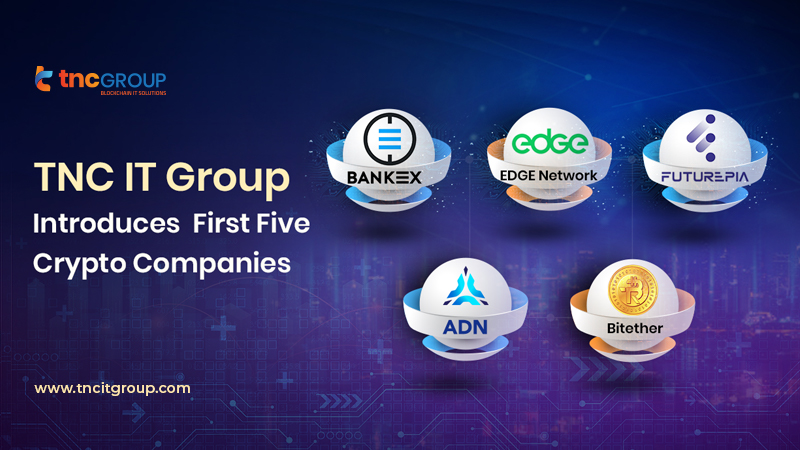 TNC IT Group has stunned the world when it revealed its goal to unite the cryptocurrency world. As a relatively young company, TNC took the brave step of launching an ambitious project like the Crypto M&A program. When we started market research in 2018, we have looked forward to the day of closing merger deals. Now that we reached this important milestone, we are thrilled to introduce five blockchain merger companies more in-depth.
After less than a year in marketing the Crypto M&A project, we can now reveal the first batch of blockchain companies. This serves as a big step for us in moving forward with our mission to unite more cryptocurrencies around the world.
We at TNC IT Group thank all the tech entrepreneurs and blockchain company founders who believed in our vision. We believe this is the start for more possible collaborations in the future.
Get to know the first companies that have joined our network through the Crypto M&A program.

Founded in 2017, BANKEX offers Bank-as-a-Service (BaaS) with blockchain-enhanced security features. It offers banking-focused services that operate using the Proof-of-Authority (PoA) protocol. The BANKEX project allows the digitization, tokenization, and exchange of fiat or digital assets for the development of a tokenized ecosystem. The company leverages blockchain technology to create Smart Assets and build a new-generation decentralized capital market.

BANKEX has also established branches in Japan, South Korea, Russia, and the United States. It was successful in holding a token sale event that raised approximately 70,000 ETH during its Initial Coin Offering (ICO). Entrepreneur magazine, an American business-focused media featured BANKEX as one of the most promising ICOs. BANKEX is also part of the Top 50 fintech companies list published by Financial IT’s Pathfinder Ranking in 2017. In 2020, BANKEX was selected by Oasis Lab, an Andreessen Horowitz portfolio company to be part of its Dev Accelerator Grant Program.

EDGE Network introduces an innovative peer-to-peer serverless infrastructure that uses spare capacity and is powered by blockchain technology. They encourage the community to share spare computational storage capacity of their connectivity-enabled devices within the EDGE network by earning the network’s native token.

Edge Network has won the title “Best Edge Computing Platform” in the IoT Innovation category at the Future Digital Awards 2019. The award was given following a thorough judging process undertaken by the analyst team at digital research consultancy Juniper Research.

Futurepia network uses a patented breakthrough consensus algorithm called the Dual Delegated Proof of Stake (DDPoS) that improves network speed without compromising security. The mainnet can handle up to 300,000 transactions per second, impressively faster than EOS (3,800 TPS) or Ethereum (20 TPS). The technology has been tested and certified by Korea Laboratory Accreditation Scheme (KOLAS).

ADN aims to provide is a blockchain with high-throughput, high scalability, and high availability for Decentralized Applications (DApps) in the ADN ecosystem. Combining the benefits initially proposed by its cryptocurrency predecessors such as Bitcoin, Ethereum, EOS, and TRON, ADN will allow developers to create and implement cutting-edge cryptocurrencies through a mainnet. The project will also have a built-in investor-oriented mechanism programmed to protect the interests of the investors when they invest in cryptocurrency projects ICOs based in ADN.

The ADN protocol is designed to become a high-performance blockchain platform wherein developers can create DApps. It focuses on protecting the investment of ICO participants through its investment protection mechanism, specifically with the use of the ICO Wallet. These will be further elucidated below.

ADN employs different modules in the core aspect, but it primarily focuses on smart contracts, consensus, and ICO wallets. ADN has its unique stack-based virtual machine, namely ADN Virtual Machine (AVM), and uses Solidity as its smart contract language. It implements Delegated Proof of Stake (DPoS), as it is proven to be the most efficient among presently-existing consensus mechanisms.

The project is registered under the legal name Bitether eSolutions Pvt Ltd and is managed by MAK International. Founded in 2013, MAK International is a reputable company that holds cryptocurrency and blockchain-focused seminars across Asia. They have also established BitEther Club, a network that aims to support one another in the competitive business market.

A Driving Force to Move Forward

On behalf of all the members of the TNC merger team, thank you! We thank every company that showed interest and believed in our collective initiative. The merging of cryptocurrencies marks the start of a progressive and collaborative partnership ahead - we are optimistic that these partnerships will lead to great innovative projects in the near future.

Interested companies can easily apply or inquire on the website by filling in a short form with basic information about their organizations. Check out How to Apply for TNC Mergers Request.

Published by TNC IT Group

View all posts by TNC IT Group